Another World, Another Life 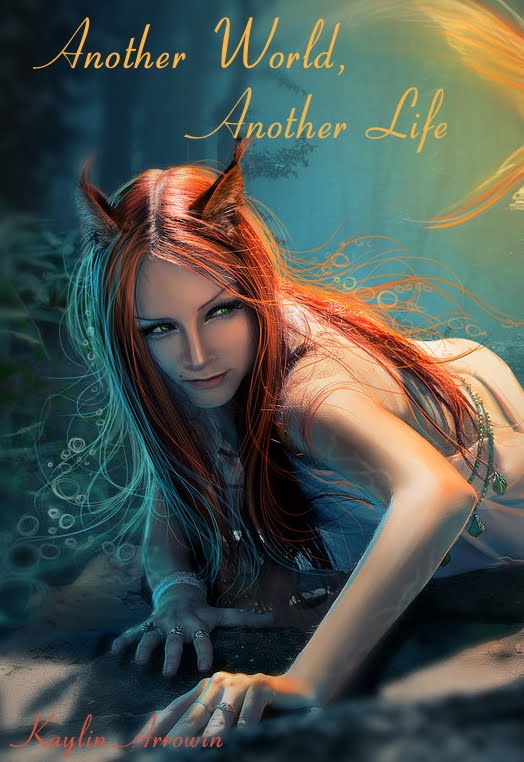 "Oh hell na-" I began, sudden darkness taking over my senses in a rush. This is the story of Kaylin and Mitzi who are thrust into a strange and wonderful world. Will they return to their so called 'normal' lives? **Currently being edited and rewritten*

Sorry for the no posts

Sorry I haven't been posting as much. A lot of things have happened over the last year or so.

First, I finally got a job. Big shocker there, but that meant I wasn't able to update or write as much as I hoped (they screwed me over big time. No skin off my nose).

Next, I hit some major writers block with chapter 2. I just hit a roadblock that won't clear up. Hopefully it will leave very soon.

Finally, I've just not had any motivation. It happens, but it'll get better.

But other than that, everything is coming along well.

Posted by Kaylin Arrowin at 1:03 AM No comments:

Chapter one is finally done!

That's right everyone, the first chapter for AW,AL is done and ready to be read.

I have made some major changes in... well... everything.


There are gonna be a lot more changes, but I will mark them down when they show up.

I other news, I have a tumblr! If you are interested in finding me just look up TheEverdayPagan.

Posted by Kaylin Arrowin at 8:24 PM No comments:

Soooo, about Chapter One...

Since I had to have my flash drive sent back to  me through the mail, I've been rewriting the first chapter.

Considering that my flashdrive (That I have personally nicknamed "nunquam moritur". which means "Never Dies" in Latin.) had been wiped by the x-ray machine they put all mail through, I still think I am doing pretty good on the whole new concept.

So far I am up to 8 pages; which I think is pretty good in my book. No seriously. This is the most I have ever written. Hell, I didn't even do my final projects for Junior or Senior English (I was just a lazy, drunk stoner then, but I digress). And people wonder many, many, things about me.

Sorry, a bit off topic there. But the first chapter is going wonderfully, there have been some major character changes.

For instance, Kaylin and Mitzi stay together instead of getting split up. They will have to fight some... rather disturbing enemies. Nothing super gross though.

Oh! in other news, a fellow Tumblr user who goes by the name "whatamievensaying" made a picture for me!

So please, if you have a Tumblr, go visit her and give her some love!

That's all the news I have for right now! Oh, when I do finish, the first chapter will be up to be read on Figment.com. Just look for Kaylin Arrowin.
Posted by Kaylin Arrowin at 12:56 AM No comments:

*Kaylin Arrowin: Let it be said that she sometimes makes good decisions. Most of which surprisingly haven't killed her yet.

Whether it was an incident involving stairs and a dare, or the decision to taste the strange liquid next to the car batteries (Which turned out to be battery acid. True story that actually happened. I was 5).

Oh she also has been arrested multiple times (though over half of them weren't her fault. it also depends on who tells the stories).

The next few chapters shall explain what I mean by this.

Posted by Kaylin Arrowin at 2:39 AM No comments:

Finally got the first chapter done!

Finally got the damned chapter done! It took hours of just staring at the computer screen and countless amounts of caffeine and chocolate, but I got it done!


Another World, Another Life- Figment


Chapter's two and on will be very difficult in coming out. I had to have the flashdrive it is saved on sent back to me, and when I got it it had nothing on it. Apparently when you send something with electronics through the U.S. Postal Service, you run the risk of having the item wiped clean by the x-ray machines that scan the mail. Dammit.


Well, whenever I do get the next chapter out you will all be one of the first people to know.
Posted by Kaylin Arrowin at 2:42 PM No comments:


This was done by the awesome LittleDarlingEve!! She does wonderful artwork, and I would love it if you would take a look at all of the beautiful things she has made!!
Posted by Kaylin Arrowin at 10:16 PM No comments:

The idea behind the story

When I came up with the idea for this particular story, I had no idea that it would turn out like this.

You see, when I originally started this, I had just finished destroying what probably was the biggest load of garbage I had written over a period of a year, and this new thought came into my mind. 'What if I could leave all my troubles behind me,be myself and let no one dictate my life?' it was then that I decided to get the ideas down on paper. at first I thought nothing of the characters, as they were modeled after myself and a friend. But after a long while I began to notice that they had a style about them, and attitudes that could rival their counterparts.

Mitzi is a friend in real life. She is awesome and strives towards her own goals. Her dedication to animals and the planet is what makes her her. Whenever we are together, we tend to cause trouble and enjoyment.

Kaylin is more of a split personality from myself. She is brash, a little too cocky for her own good, and curses like a biker.

After I had determined how they would look, I began the process of outlining how this 'other-world' should look. I decided to go with a mixture of the feudal era of Inuyasha/ Japan (specifically the Oedo period) and steampunk. So while they live in a world not overcome by electricity and machines, they still have a form of energy to use.

Next were the people they were to meet. This one was a real head scratcher; on one hand, they could meet some untrustworthy people right away and the story would be over before it began. On the other They could try and figure out where they were before people showed up and scared them into running. I obviously chose the better route.

Kurimu and Fai' Wu were more of an afterthought than anything. Originally Fai' Wu was supposed to be the reigning Queen, but they way I had designed her to be wouldn't have worked.

Kurimu is the embodiment of stupidity in men. He tends to not think about his actions, and can be quite crass when it comes to women. His last name -Feng- is Chinese for Fang.

Hopefully sometime very soon I shall have the first chapter re-written. Hopefully, the re-write will be much better than the first.
Posted by Kaylin Arrowin at 6:22 PM No comments: